Mobiphos is an application designed to run on digital cameras that supports the automatic sharing of photographs among members of a collocated group who are engaged in a social activity. Mobiphos allows users to easily take pictures, browse thumbnails of those pictures and share their photos within a collocated group of people in real-time. When a person takes a photograph using Mobiphos, that picture is automatically shared with every member of the collocated group. At the same time, she is able to view a constantly updating stream of picture thumbnails scrolling across her screen as they are being captured and shared with her by her fellow group members. From the user’s perspective, all of the photographs captured by the group form a common repository of images whereby each member of the collocated group has access to all of the photos.

The viewfinder is represented in the top-right 3/4 of the display, this area also doubles as the area where zoomed in photos are presented. The L-shaped area around the viewfinder shows thumbnails in chronological order. All photographs have a frame that has a color chosen by the user who captured the photograph. The wireframe to the right shows the animations. Here I describe each animation: 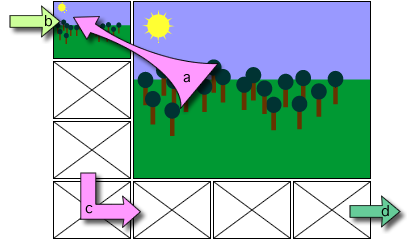